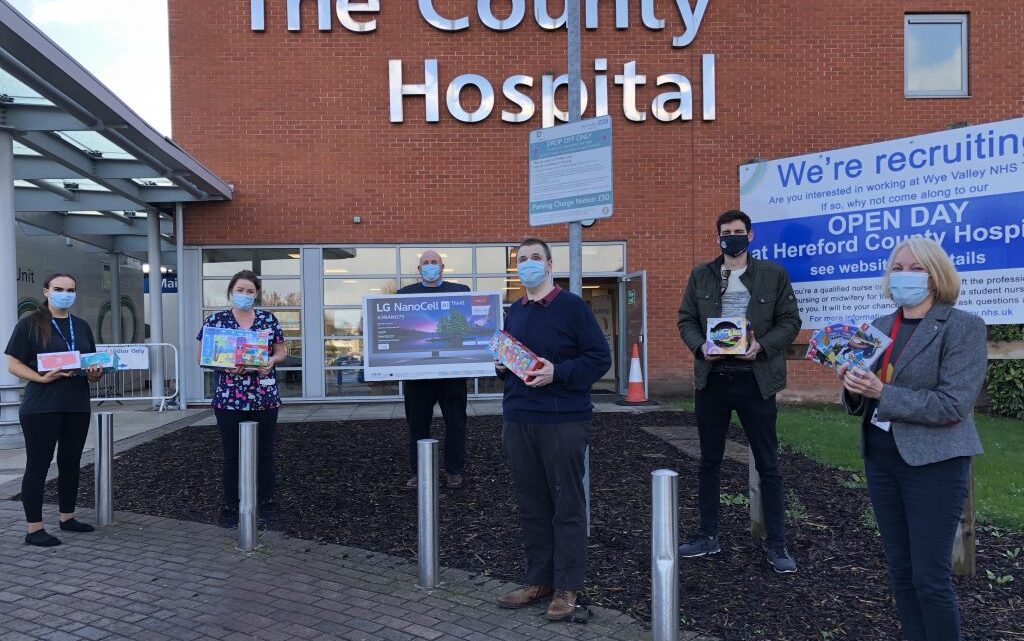 The Hereford County hospital’s Children’s Ward recently put out an appeal for Toys on Your Herefordshire. The protocols in dealing with Covid have meant that they have run out of toys for the children as they can no longer be shared and must be cleaned between each patient.

The Club asked its members to donate their usual spend on their meal at masonic meetings, with many of the members reaching deep. They also held a virtual auction for a Caeruleum Club hip flask, which was especially struck by Wilf Charles for the occasion. In total, they raised £1,185 for this appeal.

With the funds that had been raised the Herefordshire Freemasons from the Caeruleum Club donated a 42″ TV with wall bracket, 2 x Nintendo Switch games consoles with games and a collection of toys to the Children’s Ward at the Hereford County Hospital. The TV was purchased from Curry’s (Hereford), who upon hearing about the charitable cause included the wall bracket for free. Similarly, the Entertainer (Hereford) also applied a reduction on the purchases from their shop. The toys purchased include: brain teasers, card games, jigsaws, fidget cubes, memory games, craft items, models to build and a rubix cube.

“I am blown away by the support and generosity of our members. We launched the club for new and young masons in January 2020 and in our first year we have been able – due to our members – to donate thousands of pounds to worthy causes in Herefordshire. I’m extremely proud of the positive impact the Club, and the Province in general, is able to have at such a local level and within our communities.”

“Each and Every donation to the Children’s ward means so much to us all. When the Freemason’s Caeruleum Club of Herefordshire contacted us and said that they had raised enough money for a 42inch tv, toys and two Nintendo switch consoles plus games for the children we were overwhelmed! These items will make such a difference to the children that are admitted to hospital especially during the pandemic. We cannot thank the Caeruleum Club and their members enough for their generosity and kindness.”